Another long weekend in Parvati Valley !!

April 20, 2019
Life's greatest dilemma is when it's a long weekend and a production release on Friday night !! When you're not sure whether to plan or not!! But, Once a glimpse of mountain hits your mind, there's no going back :)

Yes, It's 2 AM in the morning. Me, Varun and Ashutosh are like: We've seen a lot of releases, let's explore mountains. Let's have a call and plan out. Let's book the tickets and create a list of items, we'll pack in the morning and leave in the evening. Huh, Pretty fast? Why shouldn't it be?

Morning 9 AM, Home:
Mom: Hey, what happened? Why are you packing your stuff?
Me: Mom, It's a long weekend. See you after 3 days :)

I am sure, Varun and Ashutosh should have faced the same :P

Afternoon 2 PM, Office:
We'll be going to miss good food for next few days. Let's have something delicious :) 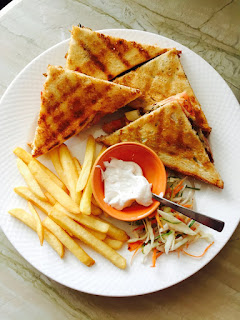 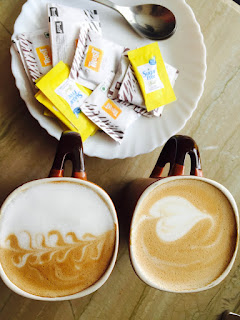 The Sandwiches doesn't only look yummy, they actually were. And, the coffee was amazing. All credit goes to Bean There. Thank you, Ashutosh Lasod and Minakshi Puniya for the company :)

Evening 6 PM, Office:
Took a Cab to Majnu ka Tila. There was lots of rush as it was a long weekend and everybody wanted to rush towards the mountain.
We had a bus from Majnu ka Tila at 8:45 PM. The suffer story starts here, as we didn't have much time and it was already a long weekend so we booked a bus with a moderate rating, and that made us pay. The bus left Majnu ka Tila at 10:40 PM, 2 hours late already.

After multiple follow-ups with driver and bus coordinator, we were happy that the bus left. But weren't aware of what was coming ahead of us. We slept off thinking of all the fun that we'll be going to have for the next few days.

Day 2: Somewhere to Kasol (The Frustration)

163 Kms still left, and we were standing on NH 205 in the middle of nowhere. We enquired someone and trekked back around 2 Km to reach Swarghat Bus stop. From there, we booked a direct cab to Kasol. We thought now we're all good, and if everything goes fine we'll reach Kasol in next 5 hours. But fate wasn't that good and we encountered a uncongenial traffic on Mandi-Bhunter highway. We didn't have any other option than to wait (the worst thing when you're on an adventure expedition).

Around 11 PM, we reached Kasol. Finally, we had some breath of relaxation. The environment was so lively that it doesn't seem like midnight. Everyone was roaming the streets enjoying the guitar music.

Hey, Wait !! It's midnight, we weren't able to book a hotel online earlier and the bad news is that it's a long weekend so we won't get one !! That's the exact reason why I like unplanned journies, You got to learn a lot from them :)
We enquired each and every hotel for the rooms, but life isn't that easy. Is it?

It's 1 AM, everyone was still enjoying the long weekend feast. We decided to stay in a Cafe for the night, Our stomach was begging for food. We got into Bhoj cafe and asked them to arrange something for the overnight stay, fortunately, they offered us a space with three mattresses installed on the floor. Something was better than nothing, so we agreed in no time. We have had some food there and we slept(PS: Some stories are better left untold :P).

Morning 8 AM, Bhoj Cafe Kasol:
Hey, Wake up. Let's not waste time sleeping here. I said to Varun and Ashutosh.
We woke up and were ready to conquer Kheerganga. We walked to Kasol taxi stand, got a taxi to Barshaini and decided to have breakfast on the way as we were already late for the trek. Barshaini is a village near Kheerganga trek point.

Morning 10:00 AM:
we reached Kheerganga trekking point. A restless night after a 24 hours journey, and in the morning we're still excited for the trek. When you're in the mountains, you're always looking to explore something new, something that you've never seen before and that's where all the energy come from.

The trip was unplanned, we're not sure whether we'll get tents on the top. Not again :(
We enquired some localities for the advance bookings, but they said we're ahead of time and will get the tents irrespective of the long weekend. Finally, some relief :) 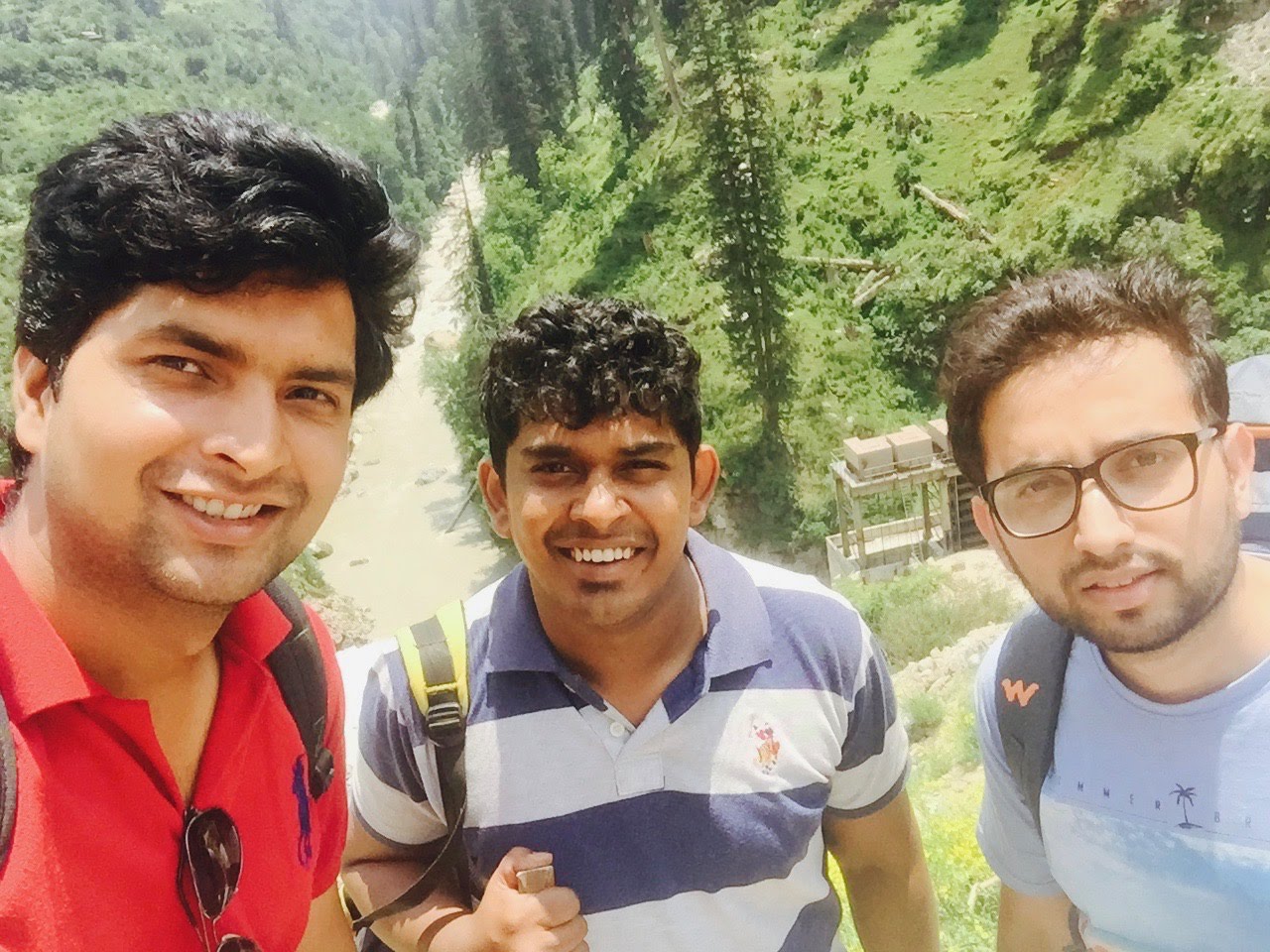 We started the trek around 10:30 in the morning. Already starving, planned to get something on the way. After trekking around 1 Km there was a small cafe on the way. We stopped and got some omelettes and tea. It was way too delicious:) 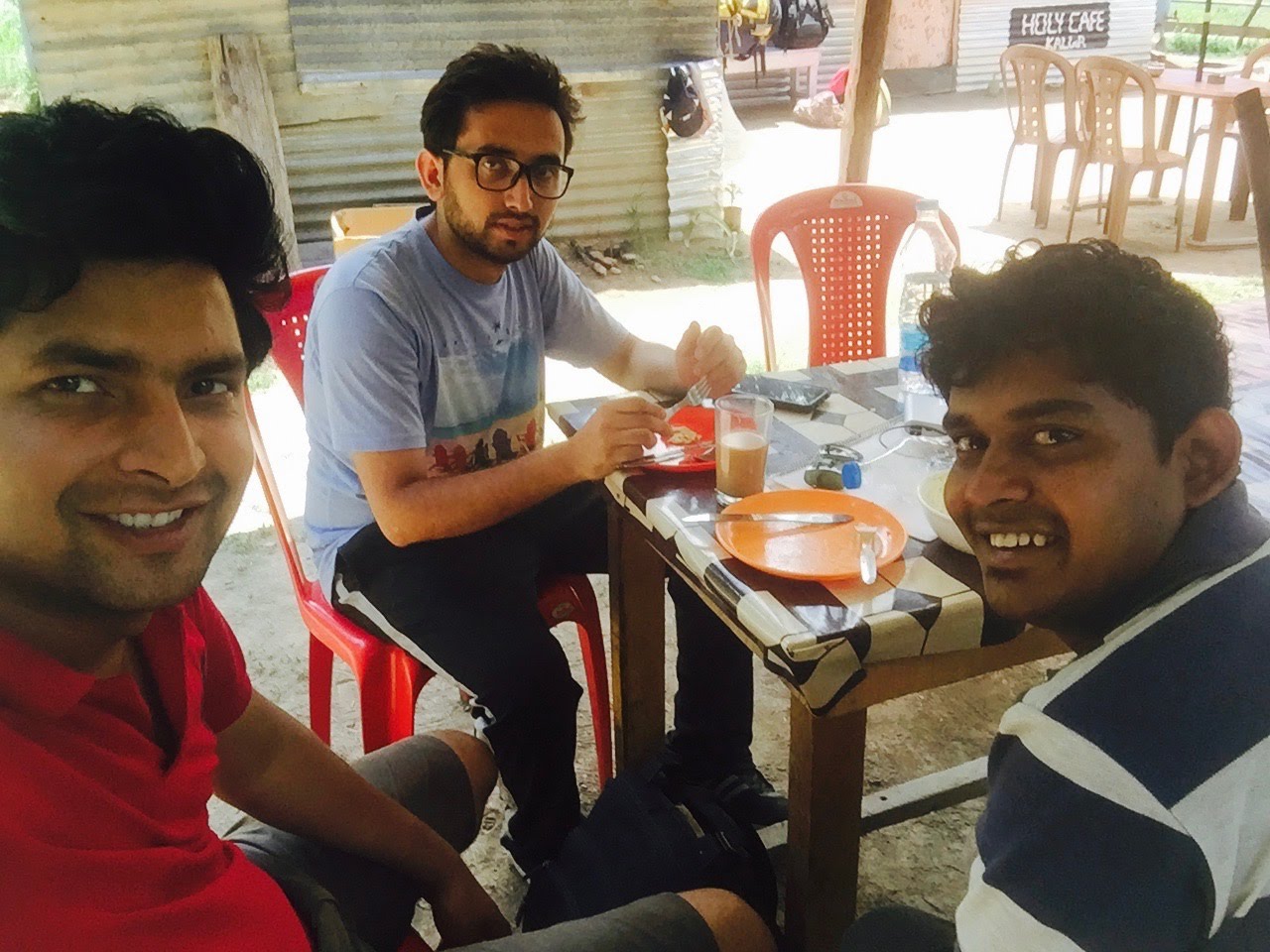 After having breakfast, we stretched ourselves to trek significant distance. Midway, If we hadn't posed, it would have been a betrayal to the fallen tree :D 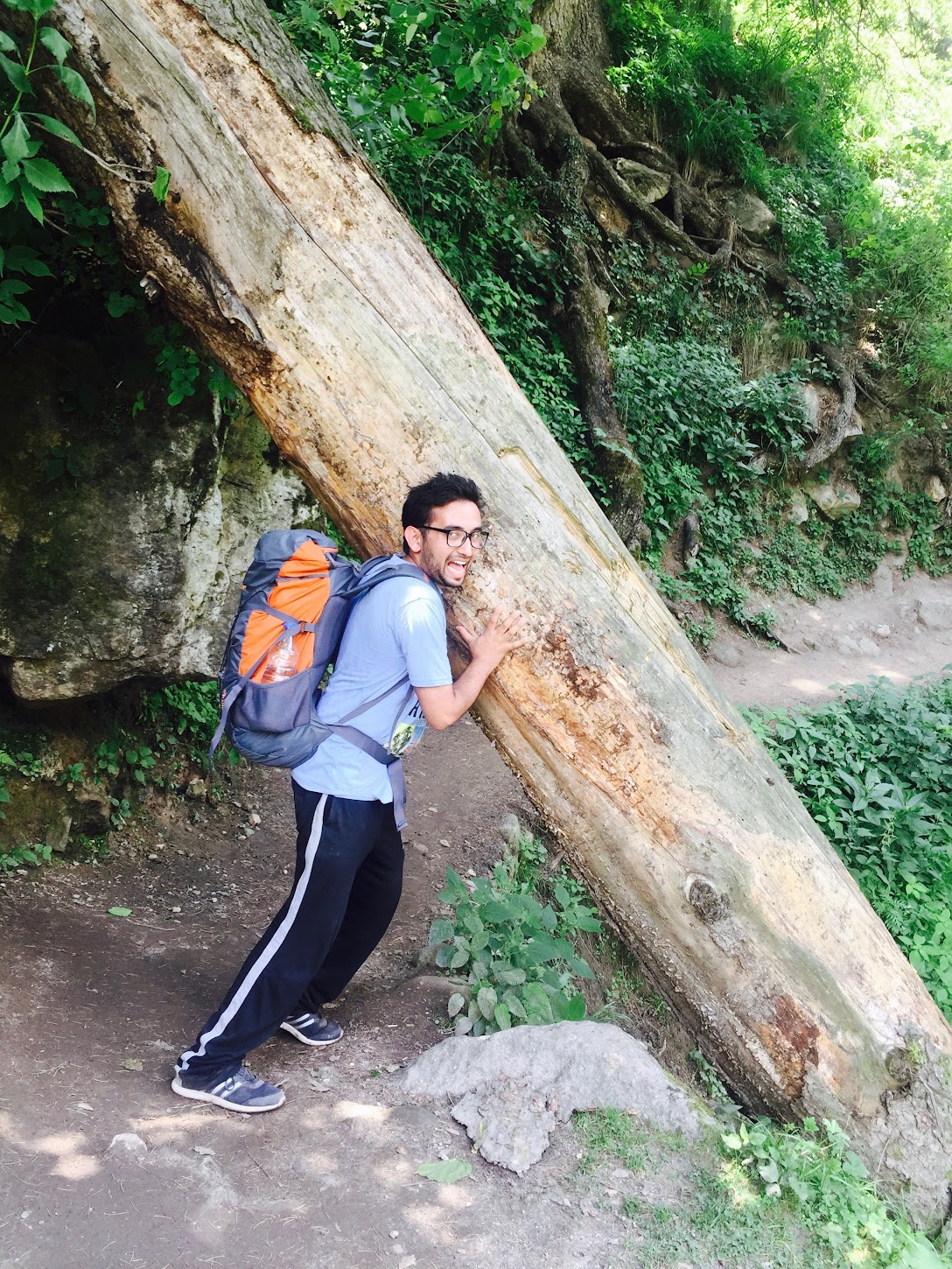 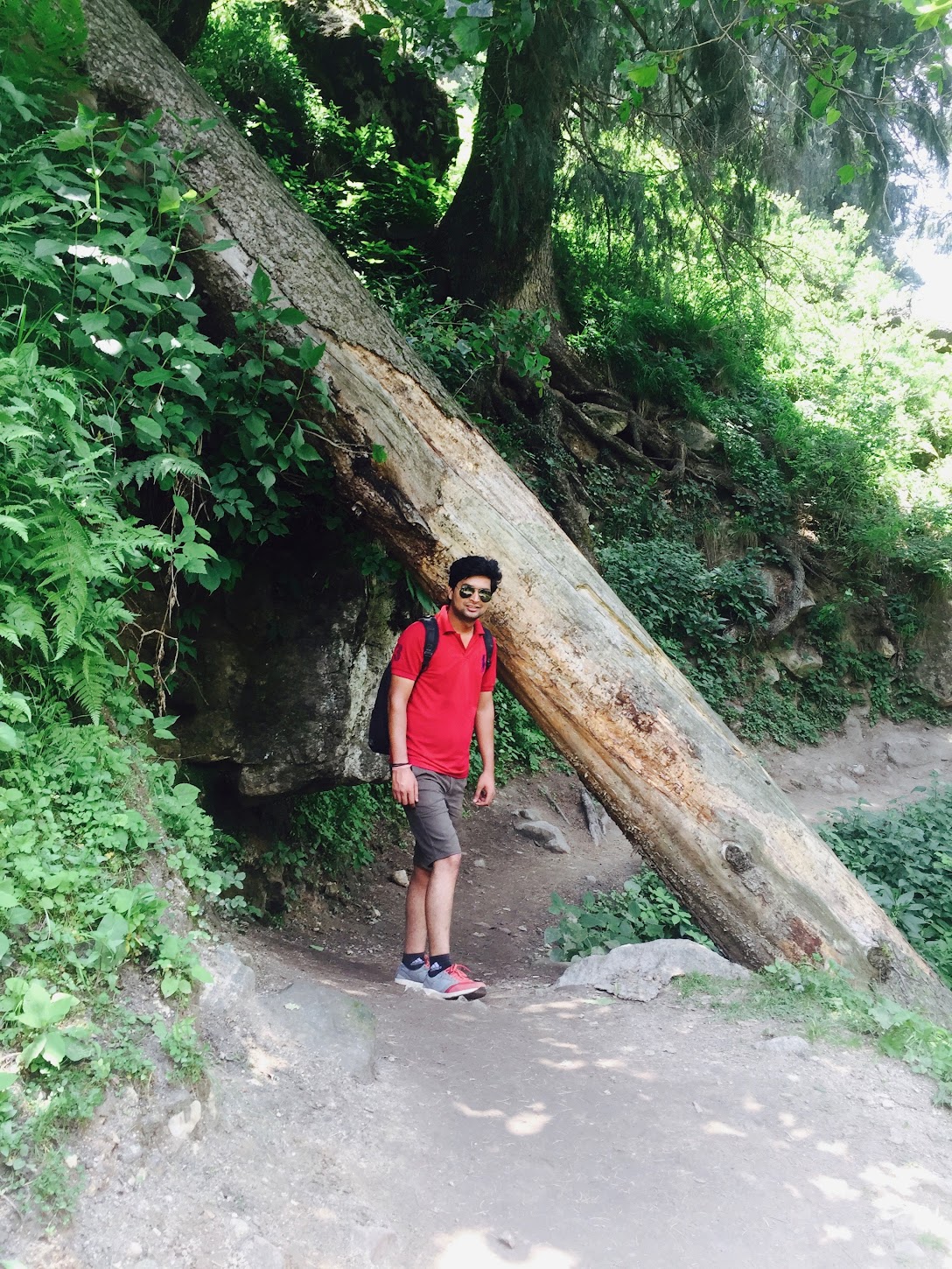 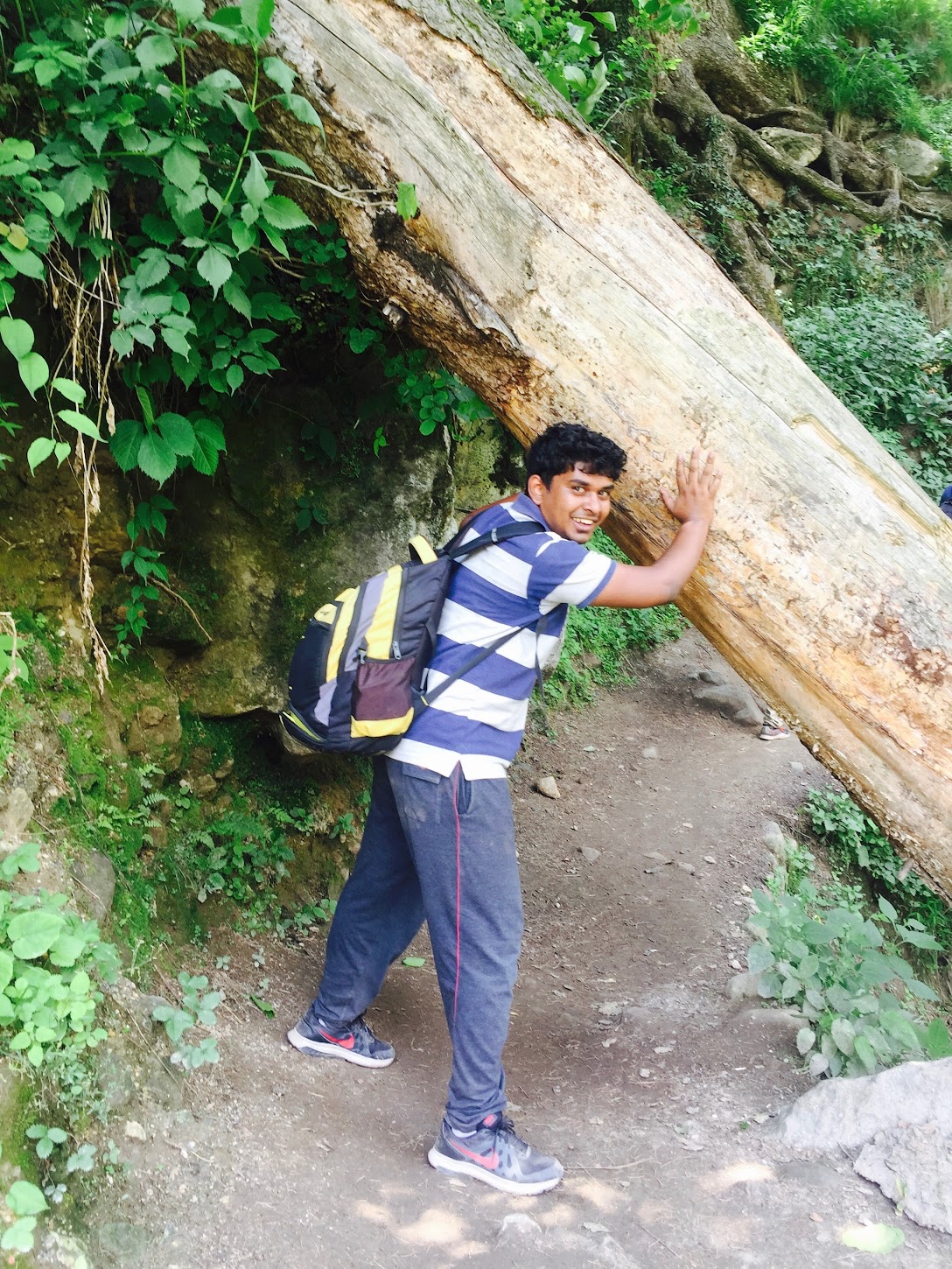 
By this time, we had almost completed around 40% of the trek. We kept moving, taking breaks and embracing the scenic beauty around. 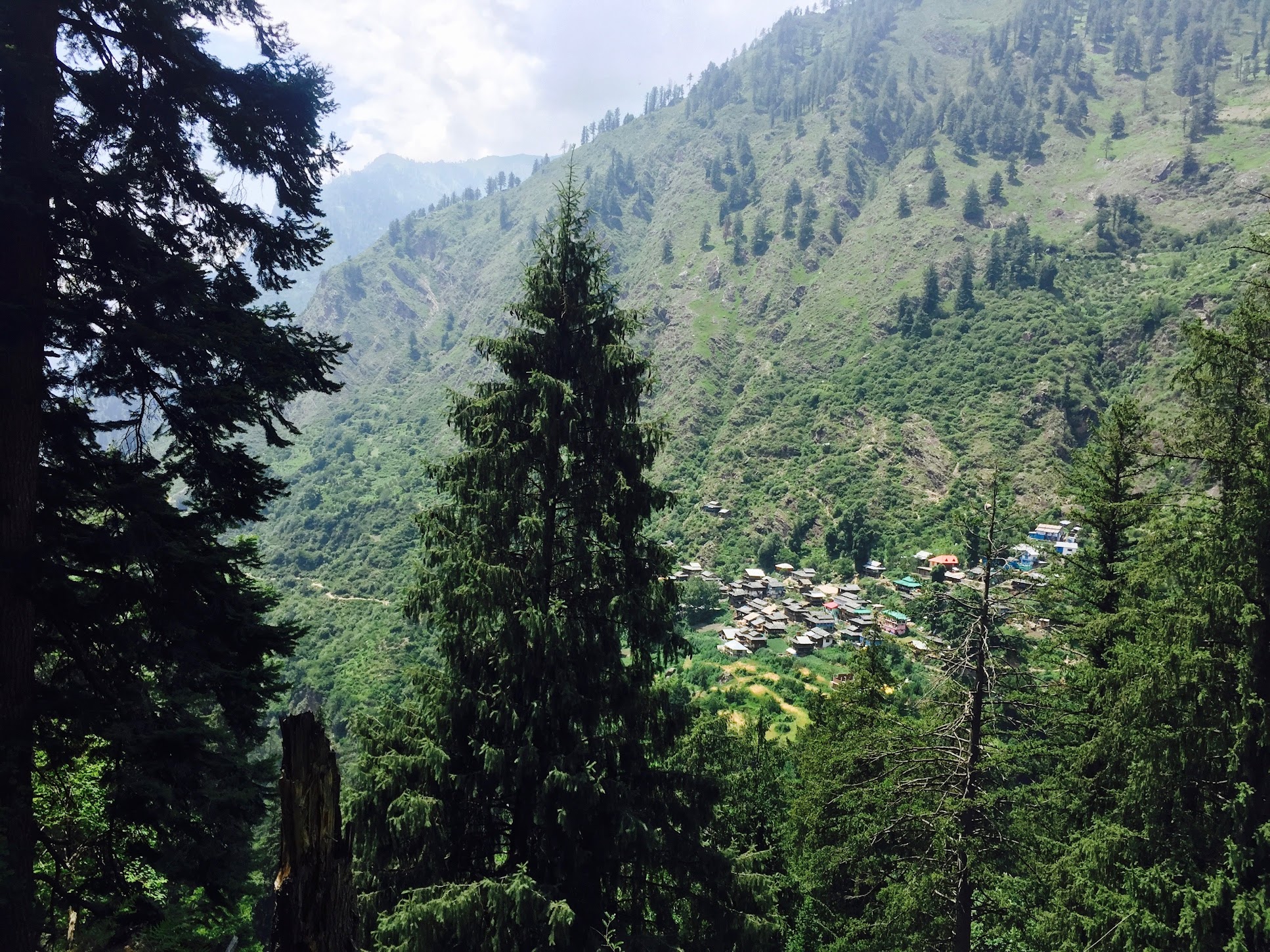 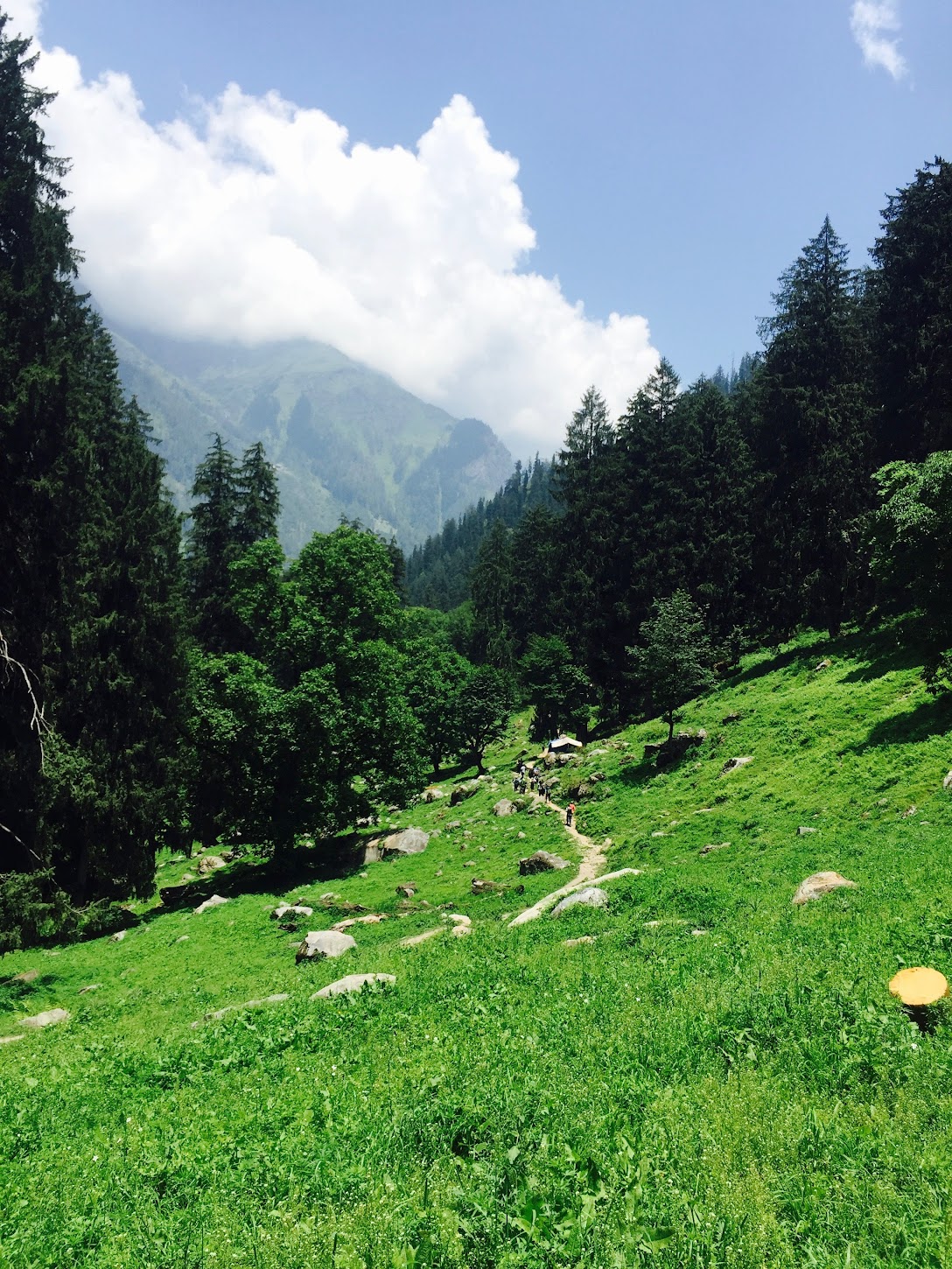 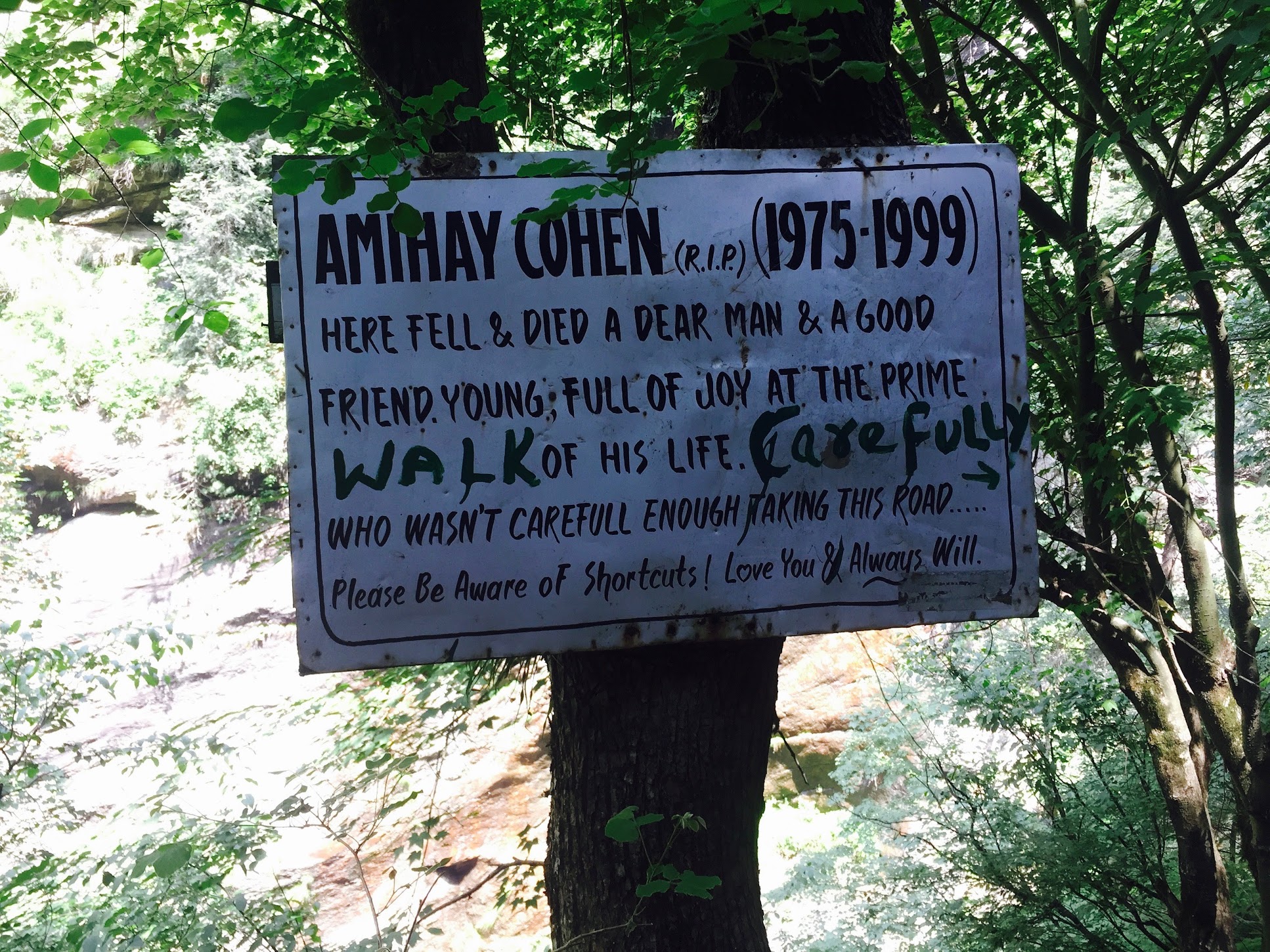 After sometime, we encountered an almighty waterfall(the most beautiful part of the trek). We refilled our water bottles. No one could resist taking pictures :) 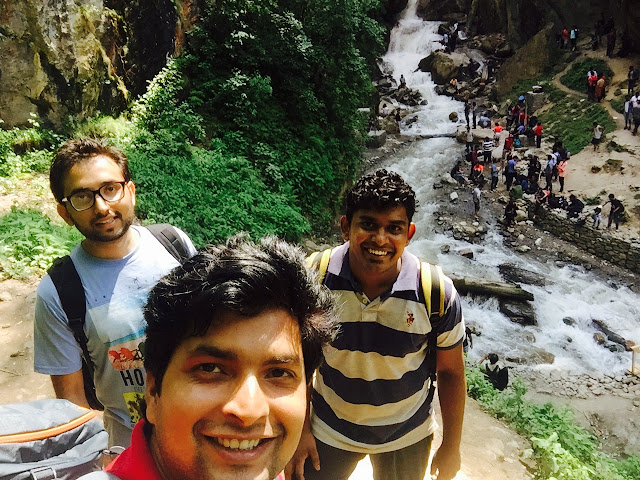 After some rest at the waterfall, we continued towards the trail. At around 4PM we were almost at the top. In the end we had to stretch for some miles as we were in a hurry to reach before everyone else otherwise we wouldn’t have  got dome tents at the top. At 4:30 PM we reach at the top and started searching for any vacant tent. Luckily we got one without much efforts.

It was 5PM, we were all set with out accommodation. As soon as we started roaming around we encountered a hot water bath at the hill top. We were already tired and a bath was much needed. We took a bath at the hot water spring. It was so mesmerising that all the tiredness was gone, we never felt like we just trekked 11Kms uphill.

It was around 6:30PM, sun was about to set. We Sat on a large stone with our speakers enjoying the sunset and the view. At 8 PM we were back at the tent, had dinner and enjoyed with other travellers there. The day was almost over and we sat in out tents around 11 PM so as to trek down the hill early in the morning.

Day 4: Kheerganga to Tosh (The day of views)

Around 3AM, Varun opened the zip of tent to get some fresh air and slept with the tent open. After 1 hour, it started raining heavily and I was almost wet inside the tent as I was sleeping in the middle. I quickly closed the zip, and made some way to pass water around the tent. We somehow slept for a few more hours and woke up to this view. 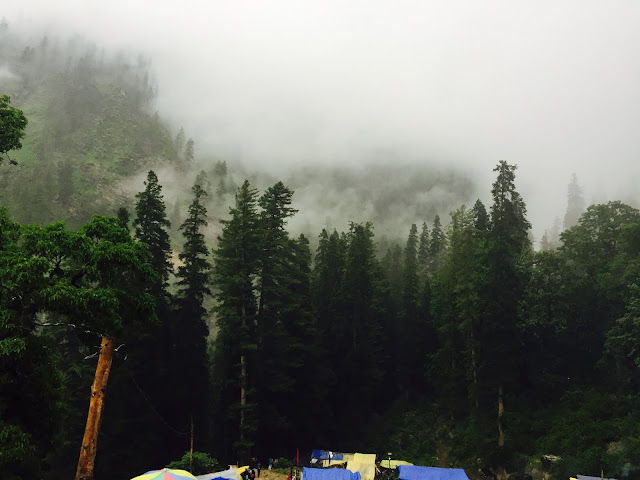 We quickly packed our belongings, had breakfast and left for the down trail. Most of the people suggested not to go this early as the whole trek was wet due to heavy rain but we wanted to utilise the whole day as it was the last day of the weekend and we had the bus back to delhi in the evening.

We started trekking down the hill around 7:30 AM, As soon as we started going down it started raining again. But we needed to move, so we continued with our rain poncho’s up. 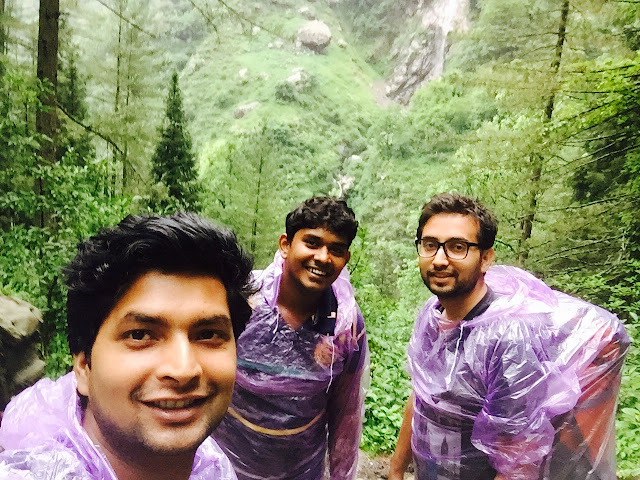 The wet and muddy down trail was so risky that you make a single mistake and nobody would be able to hear or see you again. We continued with at most precaution and tried not to slip in the mud. The rain made the down trail riskier but more scenic. 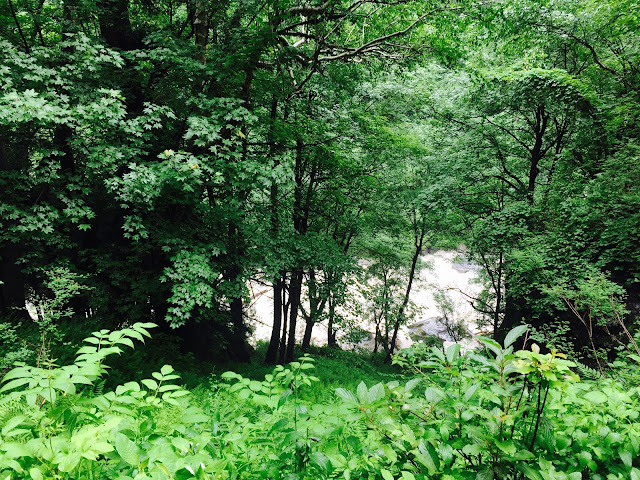 Because of rain, all the waterfalls were flowing heavier than the usual. We encountered multiple waterfalls on the back trail. Never forgot to capture any of them :) 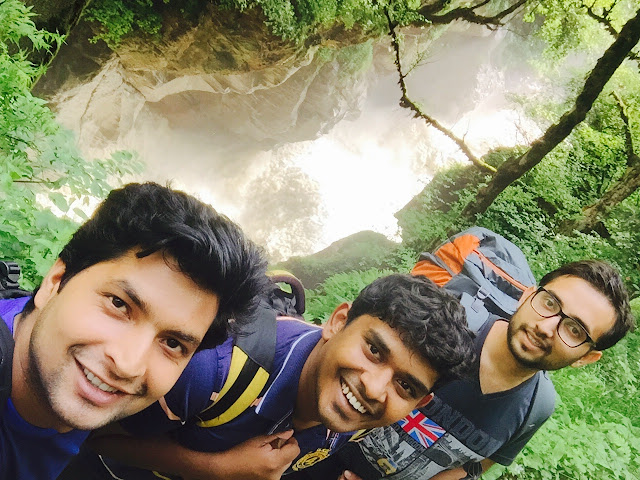 At around 12PM, we reached at the trek starting point where we had two options to choose from:
1. Go back to Bhunter and catch the bus back to delhi which was scheduled to leave at around 6PM and the way to bhunter was around 4 Hours apart.
2. Cancel the returning tickets, go to Tosh which was around 30 mins apart.

You guessed it right, we chose the 2nd one cancelled the tickets and took a cab to tosh. It was around 1 PM and we were already starving. After reaching tosh we trekked the uphill to reach at the top, Since, the long weekend was over everybody was on the way back to their homes. So, we don’t have to worry about any bookings now.

We reached pink Floyd cafe after half an hour’s uphill hike. Quickly sat into the room and ordered lunch. 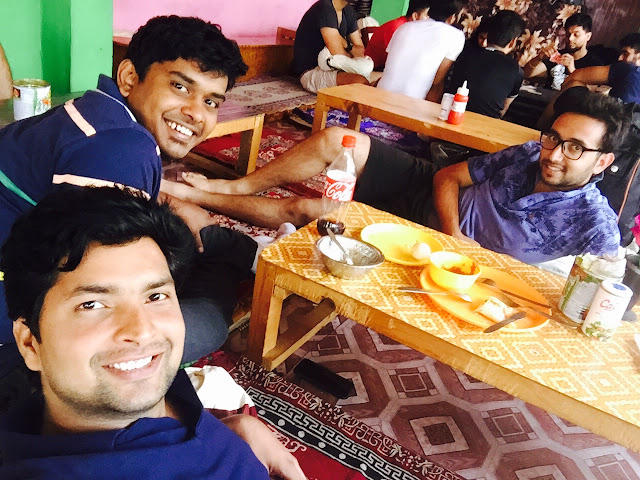 We stayed at pink Floyd cafe for the night and took enough rest mind-planning for the next day.

Woke up to a view like this and we knew our day is all set :)

Around 11AM we checkout out and left for the taxi stand. The taxi stand from Pink Floyd is another descend for about a few kms. We took a cab from tosh towards Manikaran. Reached manikaran by around 1PM in the afternoon.

After enjoying a sacred day at manikaran sahib, we took a public bus to Bhuntar. It was a journey of about 2-3 hours. We reached Bhuntar just in time, had some dinner and then boarded the bus back to Delhi. With this the long weekend came to the end and we headed towards our offices already planning the next trip in mind.

Overall it was a fantastic trip yet unplanned. We took an extra day but it was totally worth enjoying the view at Tosh.

See you all very soon with another story from the Himalayas. Until then take care :)

Popular posts from this blog 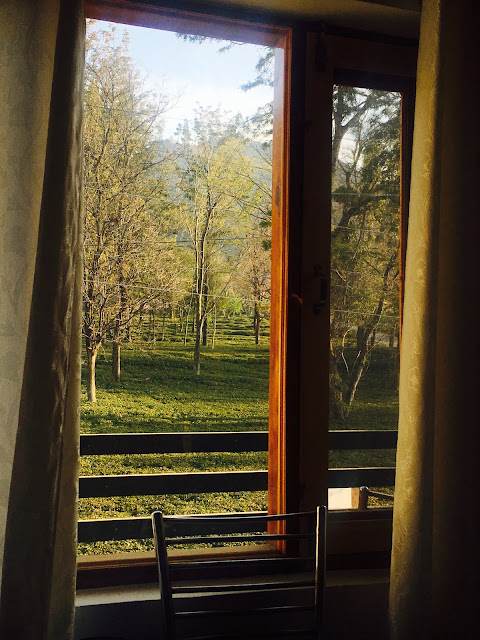 "A good traveler has no fixed plans and is not intent on arriving". - Lao Tzu

The lines quoted above by "Lao Tzu" were evident with our planning. We planned the trip at the very last moment. And this was possible because of continual efforts by Varun. He keeps poking every hour "Let's go somewhere, why to waste such a beautiful weekend". Okay, We agreed. Then started the quest for finding weekend getaways. After few hours of search, Bir-Biling seemed very promising. It's a one shot weekend destination for trekking, Camping, and Paragliding. Since we had to do everything quickly, we decided to get a package and it was one of the best decisions on the whole trip.

About the place: Bir-Biling is a Trekking, Camping and Paragliding destination in the heart of Himalaya's around 70 Kms from Dharamshala in Himachal Pradesh. Biling is situated north of Bir at a distance of 14 Kms on the way to Thamsar Pass trek, which is leading to Bada Bhangal tribal …
Read more